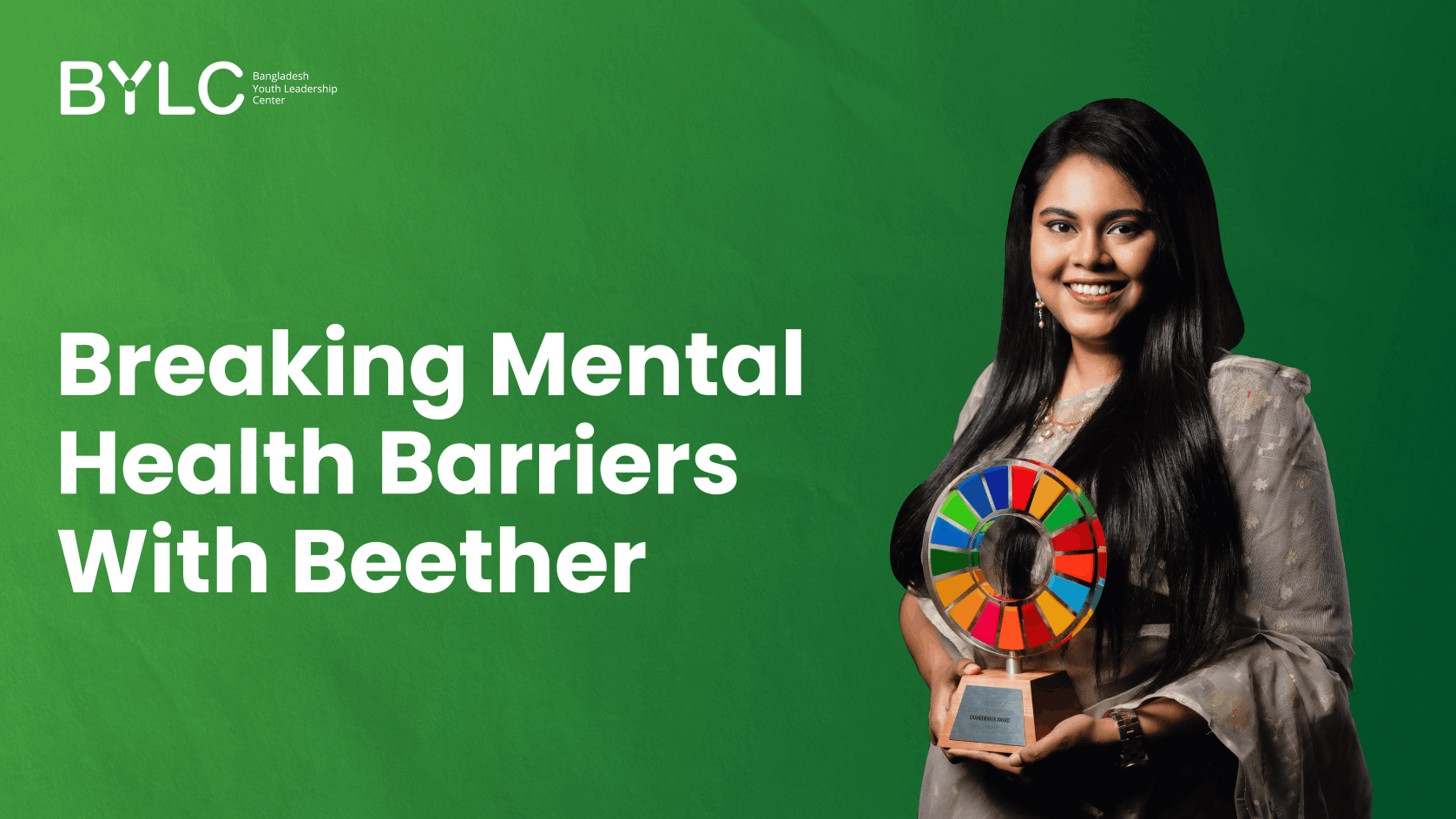 “When we started with Moner School, people did not even want to talk to us or have their name associated with an organization that works with mental health,” says Fairooz Faizah Beether, the first Bangladeshi to win the Global Change Makers Award by Bill and Melinda Gates Foundation in 2021.

In an interview with BYLC, Beether, a BYLC graduate of the Youth Entrepreneurship Bootcamp held in 2019, reflects how her passion project succeeded despite the many prejudices against her, her team, and the work they were doing.

Beether met five of her co-founders at a youth-based training in Khulna. As all of them were committed to aiding and supporting people suffering from depression, they got together to form Moner School in 2018. Beether and her team members soon realized that depression is just one of many mental health problems. They understood that they would need to broaden their horizon to address mental health on a greater platform. Since then, Moner School has been providing para counseling and mental health aid to more than thousands of youth.

We asked her about some of the biggest challenges Moner School has faced. She expressed, “The mindset of regular people and the taboos that are persistent in society delayed our work to an extent.” When conducting surveys to understand the feasibility of Moner School, people were reluctant to speak to them or be associated with any initiative on mental health. Some even concluded the team members must be affected by mental health disorders themselves, otherwise, they wouldn't be keen on speaking frankly about these sensitive topics. People also could not fathom how a few youngsters could be leading an organization. But keeping with this year’s International Women’s Day theme of breaking the bias, Beether, and her team kept their spirit alive and pushed through. Her advice to move forward in this field is to have both “prevention and cure.” She says, “Not only do we need to create more professionals and normalize seeking help but it is crucial to educate children about mental health and the possible repercussions of not taking care of your mind.”

Beether mentioned how the biggest misconception about mental health in Bangladesh is that it’s a “rich people problem.” Undoubtedly, mental health illnesses don’t discriminate between, age, class, sex, race, or wealth. She also said this was further brought to her attention when she witnessed her domestic worker stuck in an abusive marriage despite being the breadwinner in the family. Beether expressed her sorrow regarding how casually people tend to judge others without knowing the circumstances in which they have been brought up and how women normalize abuse because they have never been “allowed” to think otherwise. Times, however, is surely changing, and women are working to shatter the glass ceiling. “We are hopeful,” said Beether, as she thinks about how far women have progressed.

When asked about how she maintains her mental well-being while caring for so many, she said, “The fruit is so much sweeter than the effort.” She spoke candidly about how Moner School grew during the pandemic and received a massive response which they were not initially prepared for. Her father’s words of wisdom inspire her to carry forward with her work: “Everything that you attain in life belongs not only to you but also to those around you. You have to share your gifts with everybody.” After losing her father at a young age, Beether’s relationship with her mother became stronger. She says that she gets her strength from her mother while her father bestowed the gift of empathy to her. Two critical skills that are needed to practice leadership.

Lastly, Beether reflected on how the training she received at BYLC’s Youth Entrepreneurship Bootcamp in Srimangal and the memories she created there are everlasting. She shared how the program helped her build a network that will help her throughout her life and equipped her with an entrepreneurial understanding of how to make projects scalable. She is grateful to have shared a wholesome journey at BYLC with H.M Ragib Sharear Alam, one of her Moner School co-founders and wishes the future graduates of BYLC and its programs all the best.

We at BYLC are proud of Ms. Beether for becoming the changemaker she is today, and breaking the bias against an essential topic as mental health. This International Women’s Day, let us aspire to be and celebrate women of strength, courage, and shatter biases everywhere we see them.