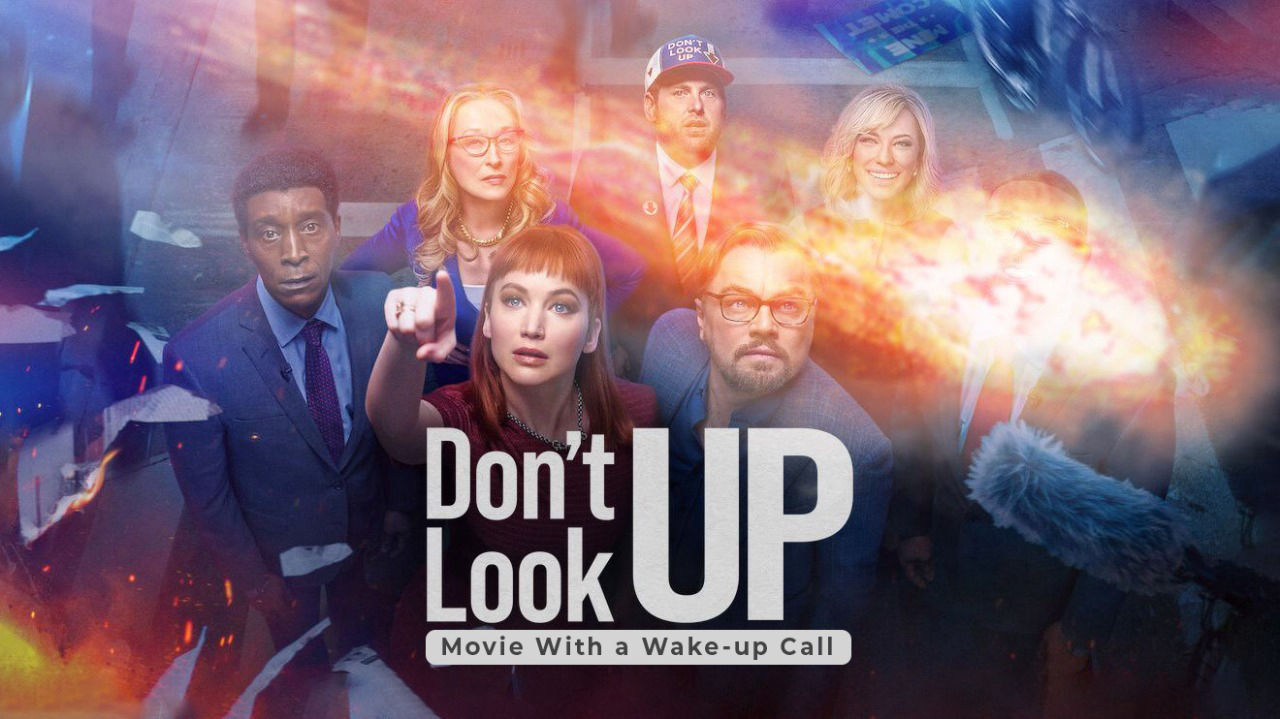 Don’t Look Up - Movie With a Wake-up Call

Don’t Look Up is a star-studded movie directed by Adam McKay, who brought us films like Anchorman and The Big Short. Though aimed to be a comedy, the movie had us cringing throughout, but perhaps this uncomfortable feeling was due to how eerily relevant this fictitious film was to our current global situation aka the climate change crisis. The movie serves as a wake-up call and here are five important lessons we can learn from the movie and improve on. (warning subtle spoilers ahead)

1. Act now on climate change:
Though in the movie, the crisis is related to discovering a giant comet that is going to strike the Earth, the current issues we are facing with climate change is nothing short of an Earth-shattering disaster. The global temperature is rapidly rising, and the developing nations are facing the brunt of it all. COP 26 brought in front of us the pressing issues which should be acted upon instantly, establishing loss and damage funding, getting finance flowing, and bending the curve to 1.5°C before the end of the century, among other challenges. Powerful countries have stalled climate action long enough, just like President Orleans (Meryl Streep) ignores the comet to serve her own personal agenda of doing well in the polls. It’s high time leaders of forefront nations stop considering it a hoax and act on making much-needed changes.

2. Choose who influences you:
There are countless influencers who are bombarding the internet with content. We need to be more conscious of who we allow to influence us and our lifestyles. Too often we follow people like DJ Chello (Kid Cudi) and Riley Bina (Ariana Grande) instead of listening to scientists like Dr. Mindy (Leonardo Decaprio) and Kate (Jennifer Lawrence). Keeping up with privileged and incompetent celebs, is not in any shape or form educational, but rather let's choose to keep up with changemakers, who work every day to contribute for the greater good of society. Instead of following people who have little to no qualifications, look up to those who share content you can learn from, that uplift your spirits, and drive you to work.

3. Start caring, turn away from your devices:
We consume an overbearing amount of content every time we look into the tiny devices and we let them control us. This also means that we look at numerous stories of crimes, heartbreaks, of global crises, which also makes us desensitized. When we read these news stories, we aimlessly scroll through because it’s just another crime, no need to pay heed to it. But it’s someone’s story, someone’s life, and death situation, how can we not care? Uncomfortable stories need to be heard and confronted. You may choose to watch a video of Riley and Chello’s proposal instead of a scientist’s plea for help, but it might literally cost your life as it does in the movie. As Dr. Mindy says, “Not everything needs to sound so goddamn clever or charming or likable all the time. Sometimes we need to just be able to say things to one another. We need to hear things.” Pause your devices and connect with people IRL.

4. Be mindful and aware of the message you consume:
It is inevitable that every individual has a personal motive they would want to promote to the masses, but it is on us what we choose to believe. There are countless news stories that pop up, and a lot of them might not be factually accurate. While social media platforms are just starting to take initiative on flagging false information, a lot of fake content still goes unaccounted for, and it is our responsibility to fact check before we share and promote those ideologies. In the movie, it is seen that the president and her supporters keep chanting, “don’t look up,” throughout but in the end, people find out they have been lied to. So look up, look around you, consume media messages responsibly, share responsibly.

5. We are all going to die:
We are all mortals, and today or tomorrow our life will end. Whether we die from being hit by a giant comet or WW3 or natural causes, it is inevitable. But does that mean we should sit back and not give a care in the world about what is happening around us? We are remembered by our actions, by the selfless things we do for other people. We need to act on climate change, we need to be able to give those who come after us a better world than the one we got. So wake up and take action. There’s a quote from After Life (a great show to watch), that resonated with me and despite this blog being about Don’t Look Up, I want to leave this here for you to internalize and think upon, “A society grows great when old men plant trees whose shade they know they shall never sit in.”