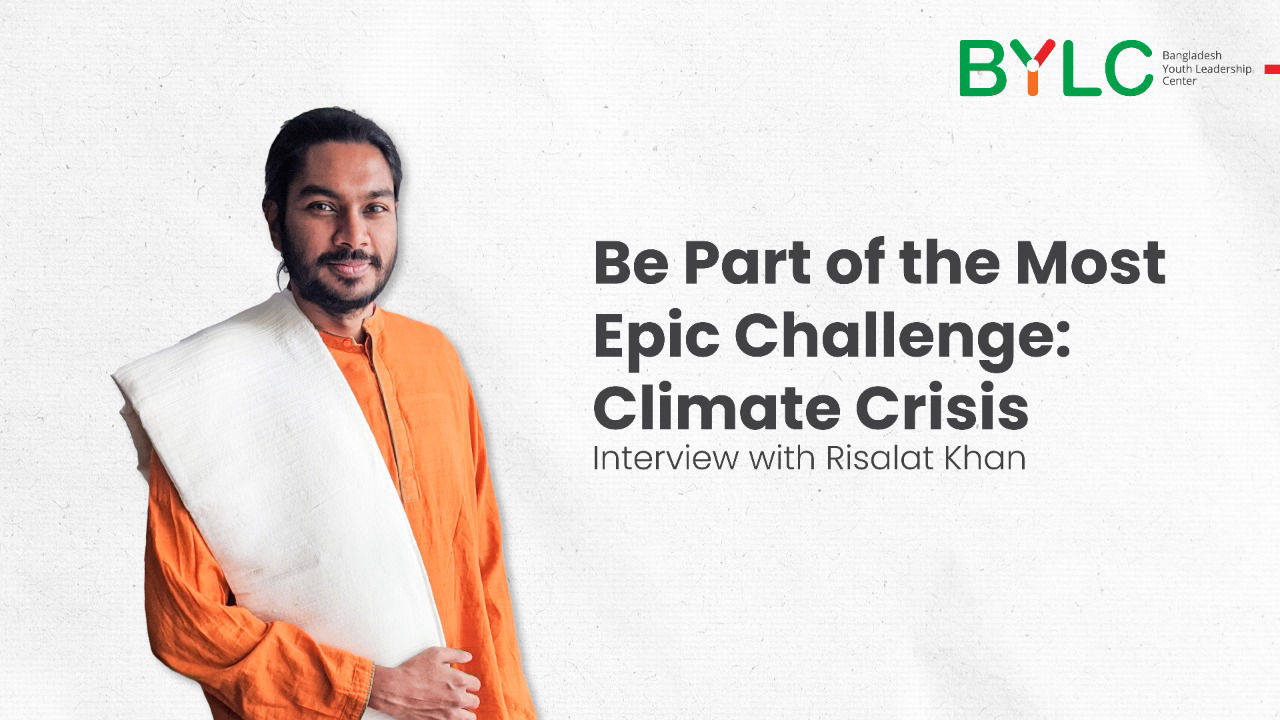 Be Part of the Most Epic Challenge: Climate Crisis

“I have news for you—whatever you’re good at, there’s a role for you in the climate fight. The next 30 years will be about reinventing how humanity exists on this planet more sustainably, and every skill matters.”
Risalat Khan, Senior Campaigner, Avaaz

Meet Risalat Khan, our Building Bridges Through Leadership Training (BBLT) 2 and Youth Leadership Summit (YLS) 3 graduate, who is currently working as a Senior Campaigner at Avaaz. Risalat exemplifies that if you are passionate about your job, you can move mountains. He has helped mobilize hundreds of thousands across the globe to come together for climate marches held around the world. In 2015, he was recognized by The Guardian as one of the “young climate campaigners to watch.”

Despite the distressing nature of climate advocacy, Risalat remains positive that if we join forces together, “we can secure all our futures.” In a conversation with BYLC’s Radeeyah Zaman Khan, Risalat shared insights on his motivation for environmental activism, the importance of acting on climate change, and the way to move forward.

1. What has motivated you to pursue a career in advocating for climate change?

Growing up with an activist father, I learned about environmental issues young. I remember going to demonstrations together to save the Burigonga, meeting Abbu’s colleagues engaged in environmental activism, and hearing from him why such things mattered for people and society.

That early influence deepened with my science education — when I pursued a bachelor’s degree in geology and environment. There I learned the scary depths of the intersecting crises we face as a country, and across the world. This includes the climate crisis, but also connected ones such as biodiversity collapse, chemical pollution, and other planetary boundaries.

As a young professional, I knew I couldn’t look away from that, and wanted to make a difference. Various serendipities led me to campaign and advocacy as a career, and I’m very grateful to have found a path that offers me meaning and purpose. It is fulfilling to me to be able to play a role in making the world a better place.

2. What is one aspect of society’s understanding of climate change that you found absolutely shocking?

By now, it is fair to say that a large segment of the population knows some of the basics of climate change. There has been enough media coverage that anyone who reads the newspaper has probably learned a few alarming facts about the climate crisis. What I find shocking is the sheer capacity of humans to see something that should be of immense concern, and at the next moment to simply look away and focus on trivialities.

How many of us spend hours every day scrolling through random posts on social media? And how many read up about the recently released IPCC report, which says our chance to secure a “livable future for all” is rapidly closing? The damage we’re doing right now will be paid for by many generations to come, and we have so far collectively chosen to shrug it off. It’s a painful realization.

That’s not to say this is inevitable. Thankfully, more and more of us are paying attention, getting active, and slowly the tide of change is turning.

3. Why do you think this year’s theme for World Environment Day, “only one earth”, is particularly important?

Fifty years ago, the first global conference on the environment took place in Stockholm under the same theme. So it’s fairly historic that the same theme is repeated this year, on a vastly altered planet that has tragically lost over two-thirds of its wild animal populations since then. In that time, the original essence of that “only one Earth” theme has now become mainstream accepted wisdom, but that wisdom has yet to be acted upon meaningfully. The next fifty years must be about putting that wisdom into practice.

Interestingly, that same period has corresponded with the first fifty years of Bangladesh’s independence, and seen the rise of a country written off as a “basket case” to one that is making impressive strides in a number of fields such as human development, commerce, and climate adaptation. The next fifty years for Bangladesh will be largely defined by our struggle for independence from fossil fuels and the challenge of providing a good life for people against the great odds of climate injustice. We need honest and courageous politics and governance to deliver that.

4. Do you think traveling or globetrotting can help people feel more strongly about saving the environment?

I’ve been very fortunate to have had diverse travel experiences — from witnessing firsthand the rapid melt of glaciers in the Arctic alongside climate scientists to planting trees with Maasai friends in Kenya, to learning indigenous conservation practices with Maōri community elders in New Zealand. These experiences helped me appreciate the enormous complexity of the challenges that different communities and ecosystems face, as well as the myriad inspiring solutions that are put forward by the same local communities.

And I’ve mobilized for marches with activists on the streets of Dhaka, Paris, Lima, New York, and beyond. This helped me feel the commonality of human resistance — how people from across the world, often led by young women, are linking arms and refusing to give up against the formidable power structures that drive the climate crisis.

The only way to succeed in the climate fight is to link arms for collective action within and beyond borders and drive change in power centers (large organizations, institutions, and governments). That may involve some physical travel, but many do not have the privilege of that. Thankfully, in 2022, communication across country borders happens at the speed of light. Most of my climate campaigning work depends on the digital sharing of experiences, knowledge, and strategy with colleagues and partners around the world. It’s amazing that sum of human knowledge and instant communication superpowers are in our pockets! Let’s use them for good!

5. What would your advice be to the youth looking to work in the environment sector?

I have news for you — whatever you’re good at, there’s a role for you in the climate fight. The next 30 years will be about reinventing how humanity exists on this planet more sustainably, and every skill matters.

Fifty-some years ago during our liberation war, teenagers and youth in their early 20’s risked their very lives by the thousands, to answer the call of their motherland and fulfill their patriotic duty to safeguard her independence.

I see the struggle of our generation as an extension of that. Our country faces grave threats from the climate crisis, and a very powerful enemy (a.k.a. the fossil fuel forces and their allies) is threatening our very existence. If they have their way, our country will largely go underwater and be unable to support our population.

So what is our patriotic duty now?

Thankfully, there are young people all across the world joining the fight by the millions, and taking to the streets. They are your fellow soldiers — join them and figure out how we win (peacefully) over the enemy and secure all of our futures. All I can promise you is that there’s enough adventure in store for your entire career. You have the opportunity to be part of the most epic challenge humanity has ever taken on.

6. What is one simple way everyone can make sure to safeguard our earth (specifically for Bangladeshis)? / What are some small ways we can advocate for climate change?

To build on the liberation war example, this often-asked question is similar to asking in 1971 what’s a simple way to help Bangladesh win independence.

I hate to break it to anyone - but there is no one simple way. Manifesting the scale of change we need will require grinding teamwork day in and day out from numerous committed individuals, just like winning independence did. Whether you will be one of those individuals is up to you to decide. It can be a deeply fulfilling choice — but consider wisely whether it’s right for you.

If you’re not going to be one of those individuals, I hope you at least spend the time to be honest with yourself about the reasons why, and feel good about that trade-off you’re making. I don’t want to shame people — I have a lot of respect for anyone leading a hard or challenging life with a lot of responsibilities and not enough resources when it comes to time and money.

But for those who do feel a call to adventure to be part of this epic transition, it can still be hard to find out where to start. Join a community group, start talking to like-minded friends, browse around for ideas online, or reach out to an older mentor you trust. My DM is open - if I can help, I will try.